Airtamer  /  Fight the Flu   /   Sneezing On An Airplane: Video Shows Airborne Particles Can Travel Up To 50 Feet

When a person near you sneezes, it is unhealthy. When a person sneezes near you in a confined space like an airplane, it is more than unhealthy. In fact, it is nothing less than a health risk.

A new animated video created by the Pennsylvania-based engineering firm ANSYS, simulates just what happens when someone seated in the middle of an airplane sneezes. It is actually alarming to see how swiftly germs spread on an airplane.

The video shows that even if you are sitting a few rows away from the person who sneezed you run the risk of catching the infection.

Sneezing on an Airplane

When a person sneezes, the germs released spread out in the air. Instead of staying around the infected passenger, the airborne germs circulate throughout the aircraft. “This simulation video reveals just one of the many ways influenza particles can travel in a pressurized airplane cabin. Modeling these high-flying infectious scenarios is the job of ANSYS, a company that specializes in precise simulation software.

ANSYS uses computational fluid dynamics to simulate the pattern of airflow in airplanes in order to help airlines and health officials trace how flu particles are distributed at 39,000 feet,” says a report in Popular Science. Robert Harwood, director at ANSYS explained to Popular Science, “The particles are colored to show you where the stuff goes. Those droplets get picked up by the airflow and get transplanted all over the cabin. They actually spread quite far.”

In other words, if an infected person sitting in the middle of an airplane sneezes, they can disseminate germs all around the cabin. “It is the ventilated air that spreads the germs around the cabin. So even if the passengers immediately next to you aren’t sick, you can still pick up a bug,” says a report in the ANSYS blog. The location of seats does play a small role, for instance, people sitting adjacent or right next to the infected passenger and the passengers seated behind are at a greater risk of catching the infection as shown in the video.

With Winter upon us and the rise in traveling due to both the Thanksgiving and Christmas holidays, we begin to see infectious diseases like influenza increase and spread rapidly.  Hence, you are more prone to getting sick after traveling.  According to the Centers for Disease Control and Prevention, “The flu does spread through the air, and it poses a much more substantial threat in the United States, affecting tens of millions of Americans each year and causing up to 49,000 deaths.”

“Since flu shots don’t provide 100 percent protection, health officials are always looking for ways to cut down on the virus’s spread. To do that, they often turn to airplanes — one of the most efficient modes of travel for pathogens. Filled with hundreds of passengers, squished in and unable to escape, airplane cabins can be the perfect breeding ground for the flu; all you need is one sick passenger to get things started,” says the report in Popular Science.

Immunization experts agree with the findings. Ian Henderson, professor of microbial biology at the University of Birmingham’s School of Immunity, was quoted by MailOnline as saying, “Its true – if somebody sneezes and they’re infected with flu, they will expel viruses in the cabin… You can measure the dispersion of a sneeze up to 50ft. They really can spread a fair distance.” 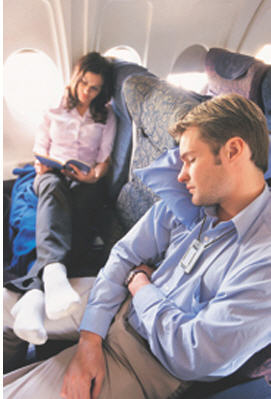 “However the risk of catching an infection is even higher in an office or a crowded cinema,” Henderson explained, “This is because in an aeroplane, the air is constantly filtered, turned over every two or three minutes. The air in an office or cinema is not being filtered or exchanged.”

According to Popular Science, figuring out how flu particles spread on airplanes has been a concern of the Federal Aviation Administration since the outbreak of SARS in 2002.

“There were outbreaks all over the world, in Asia, Africa, and Europe,” the report quotes Harwood as saying. “The reason it happened so quickly was because people got on airplanes and spread the pathogen.”

After the SARS outbreak, the FAA formed the Centers for Excellence for Airliner Cabin Environment Research to ensure the safety and health of airplane occupants.

The program tested a number of new technologies for pathogen tracking, including new cabin sensor systems and contamination mitigation technology. And that’s when ANSYS’s simulation technology stepped into the realm of aviation, Popular Science said in its report.

Taking preventative measures should be a top priority. Wearing the AirTamer A302 the world’s most effective travel air purifier while traveling is one of the most proven ways in which you can keep yourself safe from airborne infections.

With its state-of-the-art electrostatic purification system, the AirTamer A302 travel air purifier constantly emits a stream of healthy negative ions that push airborne germs – be it viruses or bacteria – away from your personal space, thus providing you with a zone of cleaner, healthier air to breathe in!

Next time you travel in an airplane, wear the AirTamer A302 travel air purifier around your neck. The AirTamer will help you stay protected regardless of where you are seated on the airplane.