*Now Shipping both the AirTamer A315 in Black and A315W in White to California Addresses!

The AirTamer Advanced A315 is our most effective personal Wearable air purifier packaged in a new, smaller size. Using digital electronics and the latest battery technology. We have packaged AirTamer’s Advanced Ionic Technology into a smaller, more portable package.

Similar to the A310 and A302, the stylish A315 emits a constant stream of healthy negative ions that force airborne pollutants away from your personal space giving you a zone of cleaner, healthier air. With the addition of a premium, replaceable lanyard and a convenient battery level monitor,

The AirTamer A315  is the latest in personal ionizer technology.

The best wearable air purifier A315 also features an easy to replace ion emission brush so your AirTamer can be restored to like new condition even after many months of usage. Just pull the old front cover off of your unit and place a new one on. Magnets will pull the ion emitter into place automatically.

AirTamer’s Power Boost Technology provides 9 times more cleaning power than the competition. It is silent in operation and it’s extremely energy efficient technology provides 50 hours of run time on one charge. The unit is easily charged by the included USB cable in only a little over an hour.

Portable air cleaner device AirTamer’s design is ultra compact and incredibly versatile. A proprietary conductive adjustable lanyard dramatically improves performance and increases run time. You can wear it around your neck (strap included) since it is smaller than most MP3 players or place it freely on your nightstand so the air around your pillow is cleaner. Wear AirTamer to create a cleaner zone of healthier air while traveling, in public places or in other poor air quality locations.

How Does the A315 Compare to Other AirTamers?

To learn more about the best air purifier A315 and how it compares to our popular A310 and A302, please click here to see a detailed comparison chart.

Now Shipping both the AirTamer A315 in Black and A315W in White to California Addresses! 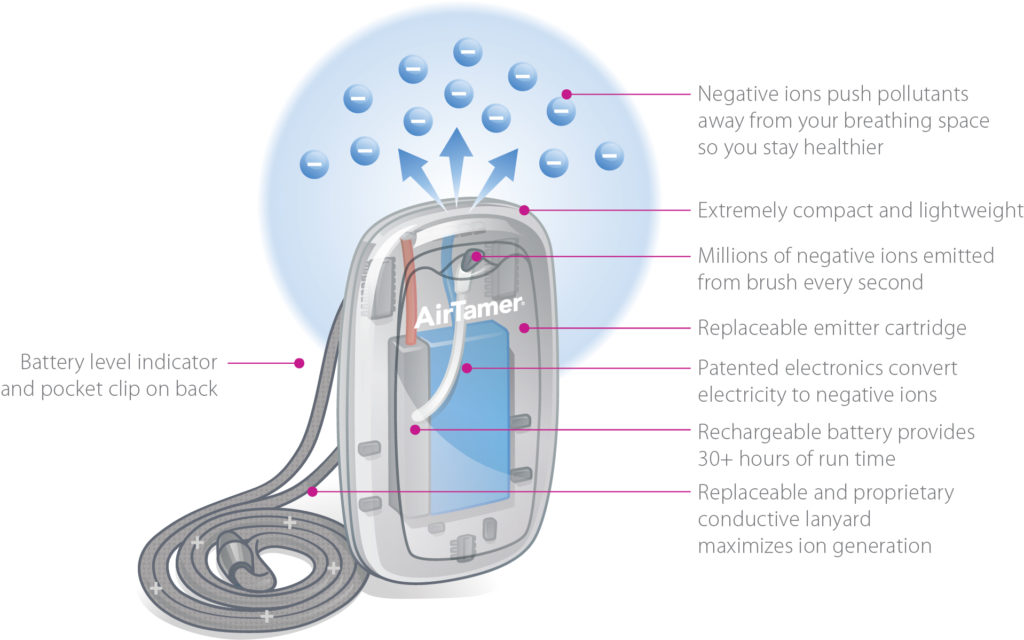 No. We at AirTamer® are sensitive to the fact that cleaning the air should not produce unsatisfactory levels of ozone, so we test for ozone emission. AirTamer® produces no measurable amount of ozone. In fact, AirTamer was tested by Intertek (one of the world's largest, independent test laboratories) and given an ozone emission rate of zero. AirTamer is also CARB certified.

Handy travel buddy for those who catch colds on airplanes or are exposed to smoke.
- J
It's hard to prove a negative, but I did wear it on long flights to and from Europe and I did not get sick. Consumer Reports seems to believe this kind of device works, but..Read more
- Shabkar
Whenever I did not wear my AirTamer, I had bad asthma attacks. When I put AirTamer on, I was breathing better within 20 minutes. I love my AirTamer!
- Jacqueline, Ballin