Welcome back! It’s week three in our Asthma and Allergy Awareness series. The past couple of weeks we have learned about air quality, asthma, and different types of allergies and how they relate to asthma. This week FilterStream is tackling Eosinophil Awareness Week. Eosinophil is a hard topic to understand so let’s dive right in.

Eosinophils are a type of white blood cell that play a role in how the body responds to allergens. These end stage cells are formed in the bone marrow and are known to be pro-inflammatory.

Eosinophils release broncho constrictor mediators, meaning they release proteins that can cause your airways to tighten. Typically speaking eosinophils are not found in the airways, however, they can be found in asthma patients as well as in the airways of those who suffer from allergic rhinitis. 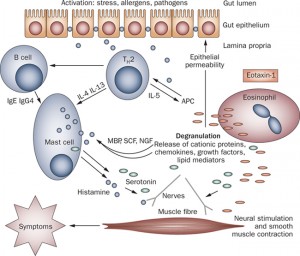 Eosinophil cells are a characteristic feature of the pathology of asthma. They are more prevalently found in patients who suffer from occupational and aspirin sensitive asthma, though they can be found in all types of asthma.

Testing for eosinophils in the airways can be a marker for determining whether asthma patients will respond to inhaled corticosteroids and for guiding steroid therapy in preventing the events of exacerbations, the worsening of symptoms. They can also be used for predicting which patients are at an increased risk of exacerbations.

Eosinophils are also a characteristic of season and perennial rhinitis. In cases of allergic rhinitis, the eosinophil cells can be found in the upper airways in the nasal passages though they are not generally found in the lower airways.

During pollen season, which is in its peak this month, those with rhinitis show a significant increase in eosinophils in their sinuses compared to those with eosinophil in asthma. It has also been found that patients with rhinitis also show a more significant increase in nasal and bronchial allergen challenges than patients who suffer from asthma.

Eosinophil Asthma and Allergy is most certainly a hard topic to cover as there is not a lot known about why these white blood cells are triggered in allergic responses. Next week, we will be wrapping up Asthma and Allergy Awareness Month.

FilterStream is committed to providing all of you with the best information and products we have available. Let us know what you think below, if you have any questions, or want us to cover a specific topic! See you next week.